City Science were asked to study transport modal choice and patterns in the Greater Exeter Region, in order to identify opportunities for modal shift and targeted sustainable transport provision which could reduce congestion and improve air quality in the region.

The data was acquired from a mobile phone operator through an approved process which ensured confidentiality, protecting the anonymity of individual mobile phone users. City Science then conducted a comprehensive data validation exercise using best practice and techniques developed for the task. This involved comparing the data against related datasets, such as census travel to work, survey data and other spatial data. City Science then completed a detailed analysis in order to identify the relevant travel patterns.

The analysis revealed many insights into how and when people travel to and from various key locations in the Exeter region. These insights can be used to inform transport strategy, both on a regional basis and for specific origins or destinations. In particular, a number of power-law relationships were observed in the trip patterns relating to popular destinations and roads frequented.

Just to give an example of the type of insights generated for specific locations, when City Science looked at the data for Exeter University, the analysis highlighted 5 roads in the Exeter region where the University accounted for more than 90% of the traffic on those roads during the survey period. Additionally, the analysis showed that almost 10% of all the tracked trips to Exeter University originated from just two LSOA zones in the Exeter region. Both these insights can be used to further develop sustainable transport strategies for the university. 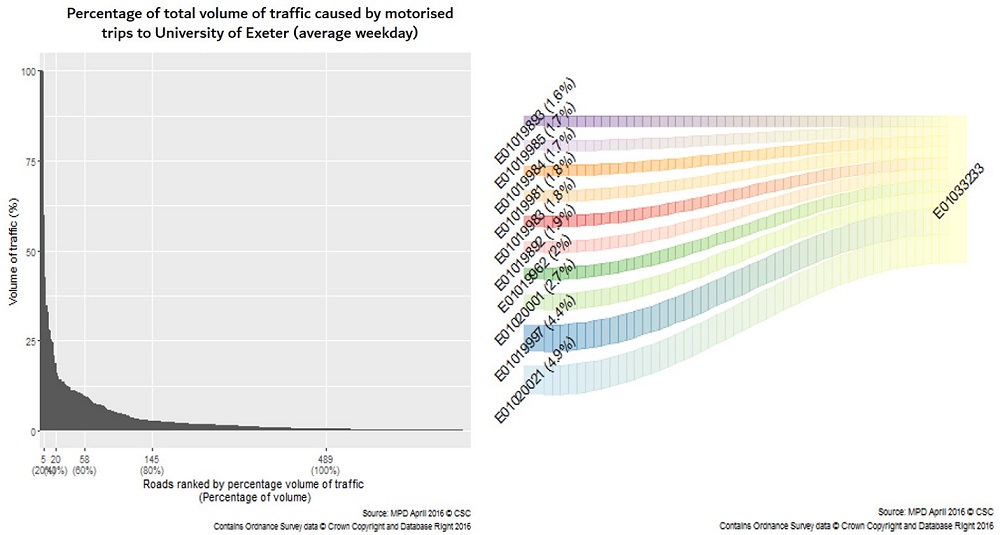